Brewers’ Brent Suter will be Game 1 starter against Dodgers 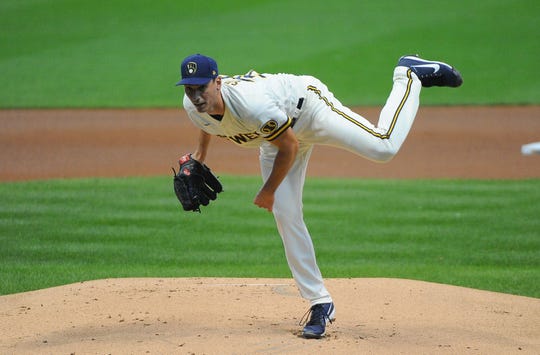 In a perfect world, it would be Corbin Burnes starting Game 1 of the wild-card series for the Milwaukee Brewers on Wednesday night.

But an oblique strain suffered in his last start landed him on the injured list. And in order to give Brandon Woodruff a full four days off after his last start, a bullpen game was deemed the best route to take against the Los Angeles Dodgers.

Cue Brent Suter, whose fifth spot start of the season will easily be the biggest of his five-year career. He’ll take the ball opposite right-hander Walker Buehler.

“I mean, it’s a dream as a kid, for sure. But realistically, no,” Suter, a 31st-round pick in  2012 out of Harvard on Tuesday night from Dodger Stadium, when asked if he’d ever thought he’d be opening a game of such magnitude.

“It’s an unfortunate reason why, Corbin going down. He’s definitely been our No. 1 and earned every bit of it. I’m just kind of trying to pick him up. I told him last night, ‘I’m going to try to take your spirit out there with me and put up some zeros for the boys tomorrow.’ It’s a dream come true, for sure. It’s quite an honor.

“But I’m just going to try to go out there and do my job and keep the team in the game as best I can.”

That the 31-year-old Suter got the nod is no surprise, considering the makeup he’s displayed and results he’s produced during his Brewers tenure.