Opinion: It’s really not a partisan office, yet voters will have to decide between John Allen, a longtime Republican lawmaker, and Democrat Dan Toporek, a political newcomer. 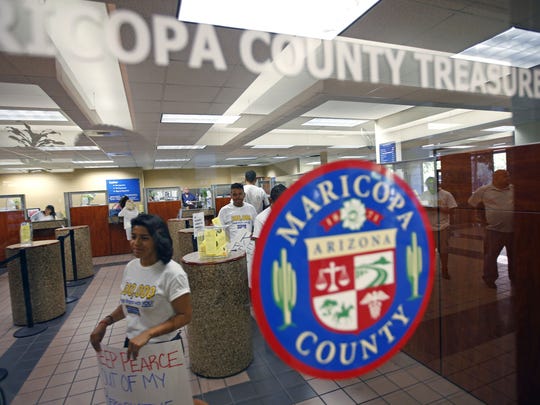 There are certain public offices for which political affiliation shouldn’t matter. The Maricopa County treasurer is one of them.

The chief duty of the county treasurer is to send tax bills and collect payments.

What powers that the office has derive from that primary charge: Disbursing money to government entities (on whose behalf it collects the taxes), investing the surplus cash and taking actions against those property owners who don’t pay their bills.

Unlike other offices — sheriff, for instance, or county attorney — a treasurer’s political persuasion doesn’t do much to inform policy or affect services to constituents.

Race comes down to Democrat vs. Republican

Nonetheless, come Nov. 3, voters will decide between John Allen, a Republican, and Daniel Toporek, a Democrat.

And it being a down-ballot race, party affiliation likely will be a primary driver of voters’ choice.

The winner serves a four-year term and replaces incumbent Royce Flora, whom both Allen and Toporek criticized for playing politics for self-promotion.

Flora famously seized headlines last year by intervening, purportedly spending his own money, to help a disabled veteran recover his mobile home that had been auctioned off over unpaid taxes.

Flora pitched himself as an advocate for the distressed homeowner, repeatedly pushing state legislation to reduce the tax liabilities of low-income seniors by moving them to a different classification. Last year, he lend his support to a ballot initiative that would have eliminated property taxes outright for any Arizonan 65 and older; it didn’t gain much traction.

Allen and Toporek say they entered the race to unseat Flora and return the office back to its basics.

Allen beat Toporek to the punch, knocking out Flora in the GOP primary in August.

Both candidates lay claim to long years of public service — Allen, a former majority leader in the Arizona House and longtime state lawmaker, and Toporek, recently retired after a 34-year career in the armed services.

To the extent political affiliation and experience may serve as an advantage, Allen has a leg up. He served as House majority leader in 2017 and 2018 and on an array of committees in his 12 years at the Legislature, from banking and insurance to audits. His record is that of a staunch conservative — an advocate of tougher border security and gun rights and most prominent last year as the Judiciary Committee chair, a resister to sentencing and prison reforms, even those proposed by fellow Republicans.

His wife worked for three decades for the county before retiring, most recently in the budget department, so he has insight into county government process and familiarity with the players.

The majority of the county Board of Supervisors and the current assessor (appointed following the arrest and resignation of Paul Petersen), whose offices work with the treasurer’s, are, like Allen, Republican.

Flora, in fact, has been in dispute with the county over pay raises he sought this year for his aides which the human resources department wouldn’t approve. He pressed the Maricopa County Attorney’s Office for outside counsel so he could sue the Board of Supervisors over the matter. It declined, prompting Flora to file a state Bar complaint against County Attorney Allister Adel, a fellow Republican.

Toporek is a political newcomer. He served as a Marine and Army attack pilot. His management experience includes the role of Army National Guard aviation training officer, overseeing a $150 million training budget.

He said he’d advocate for homeowners within the bounds of the treasurer’s office, such as changing the thresholds on low-income Arizonans 70 and older wanting to appeal for postponing their property tax payments. “Right now, the income and Full Cash Value limits are fixed so that just about nobody qualifies,” Toporek said. “We should index the figures” to account for increased cost of living and higher valuations.

He said he’d strive to work closely with other county treasurers to bring more transparency and innovation to the office.

Success would be return to obscurity for office

Both Toporek and Allen otherwise promise to bring (relative) obscurity back to what should be an executive, not political, office.

It is ironic that voters who don’t put party first and foremost will have to decide whether the job should go to someone with plenty of political experience or none at all.

We can agree, or agree to disagree — but only with the support of readers like you. Please sustain local journalism and subscribe to azcentral.com today.

The Advantages Of Collages