An Arizona State University journalism student is suing the school after she says she was removed from leading the student-run radio station over a controversial tweet.

The lawsuit claims that the university violated Rae’Lee Klein’s First Amendment rights to free expression by refusing to allow her to continue as station manager of Blaze Radio because of her tweet.

The university, in a statement to The Arizona Republic on Tuesday, refuted that claim, saying, “Klein’s conduct in the aftermath of the tweet — rather than the tweet itself — meant that she was no longer able to perform the job for which she was hired.”

But Klein said she was first scolded about her tweet and later scolded for her media appearances and conversations with elected officials as her situation gained attention.

“They were first upset by my free speech and now they’re upset that I’ve become this cause célèbre for free speech, so it’s just disappointing to see them keep taking the same stance and not want to work or correct the situation,” Klein told The Republic.

Klein faced swift backlash from within and outside her radio station after a tweet she posted in the aftermath of police shooting Jacob Blake in Kenosha, Wisconsin, on Aug. 23. Klein shared a New York Post article with graphic details from a police report accusing Blake of sexual assault.

The Aug. 29 tweet, deleted later, was captioned, “Always more to the story, folks. Please read this article to get the background of Jacob Blake’s warrant. You’ll be quite disgusted.”

Many interpreted her tweet as justifying or excusing police brutality against Black people. Klein defended it as sharing truthful information and an additional perspective, as journalists are taught.

The radio station board quickly voted to remove Klein, but Klein refused to step down. In the weeks of turmoil following, Klein said she was told that she could not stay on as station manager and was offered several other job alternatives.

The school has said Klein was not removed because of the views she expressed.

Klein’s lawsuit states that ASU is unlawfully preventing Klein from being station manager based on the content of her free speech. It asks the court to rule for her to remain in that position.

Because ASU is an entity of state government, it cannot legally deny benefits — like a job at the radio station — on the basis of speech, according to the lawsuit. The university also cannot restrict a student’s right to speech or require a student to endorse a certain public policy view, the lawsuit says. 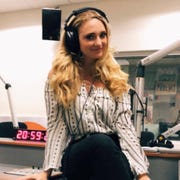 Rae’Lee Klein in the Blaze Radio studio at Arizona State University. Klein has sued the school in the aftermath of her controversial tweet. (Photo: Courtesy of Rae’Lee Klein)

The complaint states that Klein’s tweet was in line with journalistic ethics and standards, which require the open exchange of views, even views journalists find repugnant. The tweet was from her personal account and expressed an “objectively uncontroversial opinion” that Blake’s alleged sexual assault was upsetting, per the lawsuit.

Cronkite students are required to tweet and are graded on their social media engagement, according to the filing. The complaint highlights the school’s social media policy and instances where the radio station faculty adviser and journalism dean shared political or opinionated views on social media.

After the tweet controversy, Blaze Radio board members deleted Klein’s online account so she no longer could do her job, the lawsuit says. ASU funds and owns Blaze Radio but has failed or refused to restore Klein’s access, according to the complaint.

Klein said she hopes she will be reinstated but also wants to serve as an example for other students.

“(I hope) to be able to encourage students to set the tone and change the tune that free speech is absolutely protected on college campuses,” she said. “I’m hoping it kind of changes the tone of how universities perceive it as well as the confidence of students to be able to feel protected by it.”

Wilenchik, Klein’s attorney, said he had discussions with ASU’s in-house attorney before filing the lawsuit. Wilenchik said he asked school officials to confirm they had no intention of removing Klein from her position and that they would restore her access to the online station account. As the situation still couldn’t be resolved, Wilenchik said he filed suit.

Wilenchik said he’s representing Klein for free because he believes in her cause. He said when students locked her out of the station account, they said they wanted unity, but free speech is about disunity.

“It’s all about not having homogenous thought, it’s all about challenging people with new ideas, new perspectives, new facts,” Wilenchik said. “Running a radio station, running a journalism school, running a news agencyis not about unity — it never will be and never should be — it is about having that kind of debate, having that kind of exchange of ideas that this country was founded on and stands for.”

“There was no First Amendment violation here, and Ms. Klein’s claims are meritless,” Bodney said in a statement provided by ASU. “ASU and the Cronkite School have deep and abiding commitments to free speech and excellence in journalism, and this lawsuit disregards an array of facts that show just how baseless these claims really are.”

ASU said Klein’s conduct after the tweet meant she no longer could lead a student radio station with hundreds of members.

Several radio station board members previously told The Republic that Klein had lost the confidence of those in the organization and caused students at the station to feel alienated.

Klein was not fired as a Cronkite student-employee, but was rather offered several new roles instead of Blaze Radio station manager, including the option of starting her own radio station, ASU said.

“But she rejected those opportunities, insisting instead on a right to lead the organization even after it was clear that she had lost the confidence of the student volunteers and board members and could no longer effectively do so,” per the university statement.

Benefits Of A Business Education