I saw two people who were oblivious to how annoying it is for voters to see politicians who — while perhaps well-versed in social studies — still managed to come up short on social skills.

The elephant in the room in Wednesday night’s vice presidential debate wasn’t an elephant at all. It was a zebra.

When Sen. Kamala Harris and Vice President Mike Pence took the stage, the contrast was as clear as black and white.

In fact, even before Harris and Pence arrived at Kingsbury Hall on the University of Utah campus in Salt Lake City, some commentators were euphemistically alluding to the fact that the candidates came from different backgrounds.

It’s a safe bet they weren’t talking about how the 61-year-old Pence is a product of Columbus, Indiana and 55-year-old Harris was — as she was sure to emphasize at one point — born in Oakland, California.

After a tense summer of racial unrest in dozens of U.S. cities, and Americans more divided on the issue of race than we have been since the 1960’s, there they were on stage — albeit socially-distancing from one another: a Black woman and a White man.

This kind of matchup doesn’t happen every day. In fact, it has never happened before in all of U.S. history. Oh, there have been two other women nominated for vice president by a major political party — Geraldine Ferraro in 1984 and Sarah Palin in 2008. But they were both White.

Watching the start of the debate, I anticipated that fireworks were on the way — and, more than likely, over the issue of race.

Yet, for the first 30 minutes of the debate, race did not come up. Not at all, unless we count the time that Harris “humble bragged” that she had been the first person of color, and the first Black woman, to be elected California Attorney General. 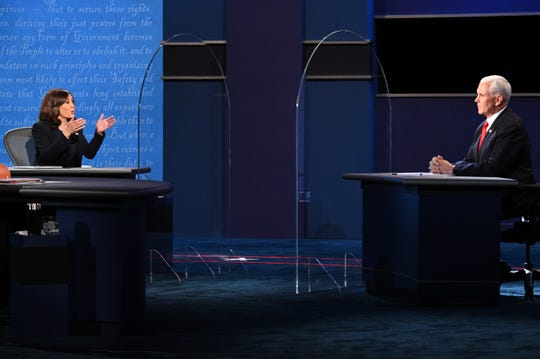 You can see why neither Pence nor Harris would be all that eager to bring up such an emotional and divisive subject.

That task fell to USA Today’s Susan Page, the moderator, who finally asked a question that sparked a 10-minute discussion about race. Page wanted to know whether the candidates thought that justice had been done in the tragic case of Breonna Taylor.

VP debate: Harris-Pence vice presidential debate is hugely important, and not just due to Trump’s COVID

The 26-year-old emergency room technician was mistakenly shot and killed earlier this year by police in her own apartment in Louisville, Kentucky. A grand jury indicted only one of the officers, and the charges are for endangering Taylor’s neighbors — not for shooting her.

As to whether justice was done, Harris replied: “I don’t believe so.” She then quickly pivoted to discussing the killing of George Floyd in May by police officers in Minneapolis, and plugged the kinds of police reform measures that she and former Vice President Joe Biden would push if elected. “Bad cops are bad for good cops,” she said. She also tried to establish her authority over the issue of criminal justice, reminding the audience that she is a “former prosecutor.”

Pence also expressed sympathy for Taylor’s family, but he said he supported the grand jury system and deferred to their findings. The vice president also condemned the killing of Floyd. But then he quickly pivoted to what he really wanted to talk about — the riots and looting that took place this summer, for which he said there was no excuse. Then, Pence attacked the idea “that America is systemically racist, and that as Joe Biden said that he believes that law enforcement has an implicit bias against minorities.”

For the next few minutes, it was a pointed back and forth on race. Harris slammed President Donald Trump for not taking the opportunity in the first presidential debate to explicitly condemn white supremacy and insisted it was part of a pattern for Trump dating back to when he “called Mexicans rapists and criminals.”

Cheerleaders for their parties

Pence responded by going after Harris’ hotly debated record as a prosecutor in California. He claimed that, as District Attorney of San Francisco, “African-Americans were 19 times more likely to be prosecuted for minor drug offenses than whites and Hispanics.” He also said that, while Harris was California attorney general, she contributed to “the disproportionate incarceration of blacks.”

And what did Americans learn from this tit-for-tat about race, and from the entire vice presidential debate that might help them make their choice about who to vote for on Nov. 3?

Not much, I’m afraid. In the end, what I was most struck by wasn’t how different the two combatants were but how similar.

Debate: Cleveland smack down wouldn’t have shocked the Founding Fathers

After a while, I didn’t see black and white. I saw two longtime public servants who were unflinching cheerleaders for their political parties and the men at the top of the ticket. I saw two people who were skilled at ducking questions and who had no compunction about interrupting one another, steamrolling the moderator, shrugging off each other’s comments with dismissive smirks and head shakes, and going over their allotted time. Most of all, I saw two people who were oblivious to how annoying it is for voters to see politicians who — while perhaps well-versed in social studies — still managed to come up short on social skills.

Ruben Navarrette Jr., a member of the USA TODAY Board of Contributors, is a syndicated columnist and host of the podcast “Navarrette Nation.” Follow him on Twitter: @RubenNavarrette